You are here: Home > Blog > CEJC meets the Executive of Polish Communication Association and “Media and Democracy Karol Jakubowicz Award” 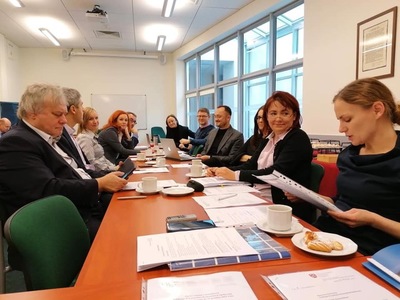 On February 28, 2020 The Executive of the Polish Communication Association (PCA) met in Krakow to discuss the report of its activities and strategies to move forward. One of the key themes was the state-of-the-art and the future of “Central European Journal of Communication”. Michał Głowacki, Editor-in-chief of the PCA Journal updated the Executive on increasing number of paper submissions, scientific databases as well as digital strategies (social media, new website) introduced by new team over the last weeks. CEJC futures, which include the launch of an online journal management system, ‘Online First’ strategy and updated version of submission guidelines, were accepted by the Polish Communication Association. The Executive also agreed that in the following months the focus shall be on further collaboration on visibility and findability of CEJC.

Photo: Meeting of the Executive of the Polish Communication Association (Cracow, February 28, 2020). Photo by: Agnieszka Hess

In addition to this, Michał Głowacki took part in the meeting of the Executive of Media and Democracy Karol Jakubowicz Award, in which the Polish Communication Association has been an institutional partner since 2018. The Award was established by Małgorzata Semil-Jakubowicz; it is granted to outstanding contributions in the areas of scientific interests of Karol Jakubowicz. The Executive during its meeting at the Office of the Commissioner of Human Rights in Warsaw agreed to internationalise its activities with the active role of CEJC. This means that from the next year’s edition nominations for outstanding contributions on democracy, human rights, public service media, media ethics and media policies will be granted by previous Award Winners as well as the Network of Associate Editors of CEJC. More detailed information about the nominees and the Award will be published in the Spring 2020 issue of CEJC. 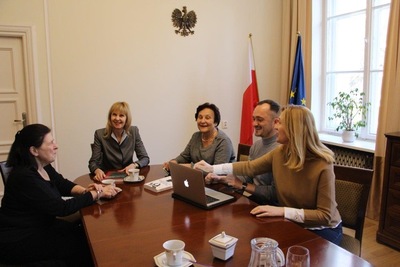 Photo: The Executive decides on nominated books for “Media and Democracy Karol Jakubowicz Award” (Warsaw, March 11, 2020). Photo by: The Office of the Commissioner of Human Rights, Poland.